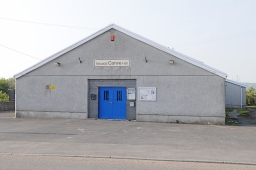 Carway is a small village with a population of around 600. With the proposed development of over 450 houses on the land of the former Dyffryn Aur and Maesgwilym farms it is envisaged that the village population will double in the next decade or so.
Carway is a well known former mining village, with historic deep mining taking place over the centuries followed by opencast mining from the 1950’s to the 1990’s . Since opencast works were completed the village has been transformed into a rural, agricultural, tourist and leisure attraction.
Over the last few years Glyn Abbey Golf Course, Ffoslas Racecourse, the complete refurbishment of the village hall and a Multi Use Games Area in the village park are a few of the attractions that have been developed at Carway
Kymers Canal near Carway and Pontnewydd, the first canal in Wales was built in 1766 by Isamabard Kingdom Brunel. Alongside the canal is a disused railway which up to 1953 was a passenger railway from the upper Gwendraeth Valley down to Cydweli and Burry Port. This railway continued to take coal from the mines of the Gwendraeth to Coedbach Washery up until the mid 1990’s. In 1995 the Pontnewydd to Pontiets Heritage walk was created joining up numerous public footpaths over the golf course near the village.
Carway village park and recreation grounds was the first park in the U.K. to be built under the auspices of The Miners Welfare Association. A football and cricket Club is located at the park and the facilities available include, a MUGA, (Multi Use Games Area) new modern children’s playing equipment, a seating area and a new youth Ultimate Sonic Centre

The hall is a stand alone building which was first built around 1970. It was completely renovated at the turn of the century. The hall is situated in the centre of the village. Seating capacity is for 200 people and there are ample parking spaces outside the hall as well as in the nearby Social Club Parking Ground

The present hiring charges are £10-00 per hour

From Llanelli travel on the B4308 to Trimsaran. Turn right on the mini roundabout and take the B4317 to reach Carway 11/2 miles further on from Trimsaran. Carway hall is situated in the middle of the village on the left hand side
From Carmarthen take the A484 and on reaching Cwmffrwd take the B4309 to Pontyates and turn right immediately on crossing the railway at Pontyates. Proceed to Carway for some 11/2 miles